Review: Red Sister and The Girl and the Stars

I don’t often fall headlessly in love.
But with these books by Mark Lawrence, I did.

Red Sister is the first book in the trilogy called Book of the Ancestor. Mark Lawrence has previously written two fantasy trilogies in a different world — one brutal grimdark and one dark comedy. I haven’t read the grimdark one, and I didn’t much like the dark comedy, but they’re mighty popular among other people, so I guess it’s just a matter of personal taste.

Red Sister, however, created a new benchmark for my reading materials in terms of tone and style. It hit all the marks (ha!) on things I didn’t know I loved until this book showed me.

Now, Nona isn’t an entirely likeable character, but you will have to look past that. There are plenty of other likeable characters from early on. And there are mysteries wrapped in mysteries, which seems to be something of a specialty of Lawrence’s. In his first two trilogies, the setting hides a treasure trove of history. Much is wrapped in the mists of time and only hinted at in the books, outlined in broad strokes for those who know what to look for. In The Book of the Ancestor, though set in a different world, there’s perhaps even more history — most of it unknown to Nona and her friends. What little information remains from earlier civilisations is either lost to time or warped into myths that hardly anyone believes in.

In the first book, Red Sister, this is all mainly background and setting. The focus is on Nona and her life as a newcomer in a monastery of fighting nuns. But the farther you read, the more Nona has to start worrying about those age-old mysteries, because if she doesn’t, people she cares about (and who you care about, too) will die.

And then there’s the atmosphere. The world itself is dying, little by little, as the light fades from an aging star. The tone this sets is a thing of absolute beauty. Combine that with Lawrence’s skills with the English language, and the result is a masterpiece. 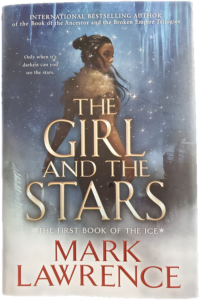 I didn’t quite realise what the different parts were that made it so beautiful until I had finished the series. And when I started on The Girl and the Stars, the first book of his next trilogy, I paid closer attention. And this book didn’t just offer another visit to the world I enjoyed. No, the first part of the Book of the Ice trilogy takes everything I liked about Book of the Ancestor to the next level.

For one, the knowledge you gained from the Book of the Ancestor trilogy lets you get one step ahead of Yaz, the main character, in her road to discovery of anything from magic powers to the world itself. There’s also the sweet little detail that Yaz is a thoroughly likeable character. The mysteries-conflicts are present — up close, in her face — from the first third or so of the book. There’s even a character, almost like an Easter egg, hinting at connections between this world and the grimdark/comedy one.

I’ve read reviews from people who thought The Girl and the Stars was too slow and that nothing happened, but they can’t have been paying proper attention. The book is a ticking bomb. I can only wait, bite my fingernails, and see what books 2 and 3 will offer.

One thing I found interesting when I heard about it is, Mark Lawrence has aphantasia, a neurological variation that means he doesn’t have a ‘mind’s eye’. I have a mild version of aphantasia myself, that makes it hard for me to picture anything more than just the broad strokes of an image. If I try to focus on a detail, the rest disappears.

Lawrence does, however, seem to share a different ability I have, to imagine the ‘feel’ or ‘sense’ of a room, a scene, an item, a person. (I can seriously imagine the ‘feel’ of a green wooden chair. Nope, not joking. But I struggle to see it clearly.) And perhaps this quirk helps Lawrence capture the feeling, the essence, of this bleak world, when others might have focused on visuals. Or perhaps it has nothing to do with it. Who knows?

But if he can write books like these, then maybe there’s hope for me, too.

So, there. I’m adding another name to my top-whatever list of Most Beloved Authors.

I would actually say he ranks among the top three, beside Robin Hobb and Laini Taylor.